Fencing is a challenging sport where you try to hit the opponent without being hit yourself. And now let that opponent have the same idea, so that is how the game started.

Technology, concentration, coordination and speed are all important to beat the other. But don’t underestimate the mental side either. Do you dare to tackle someone who is confidently waiting for you? All these aspects are therefore covered in the training and that makes screens such a fun and diverse sport.

The fencing sport is divided into three categories based on the three different weapons. Each fencer typically specializes in one weapon:

Floret: this is the weapon from which modern fencing has developed. To make fencing sport safer, rules were drawn up for fencing. Thus only the trunk, and nowadays the throat flap, became a valid target. In addition, the right of attack also applies, so that if the other person takes the initiative, you must first ban yourself before you stab back. These days, special attention is paid to the fact that the rules form a nice screen style. With all these rules about the right of attack, the floret is also called a convention weapon. The referee ultimately has the final say, and it is also important to clearly screen so that the referee sees what you are doing.
Epee: with current technology, there is no longer any reason for safety to limit the impact. And there comes the dough around the corner. In addition, the dough also has a larger bowl than the foil, because indeed your hand is also a valid target. In principle, you can hit your opponent anywhere with your opponent, from the tip of his toe to the center of the mask. These are not the easiest hits, but it makes it an extra challenge.
The sword also has no right of attack, the first to hit has a point. And if both hit within 1 / 25th of a second, they both get a point. 40 ms sounds short but those “doubles” happen regularly.
Saber: the sword is a flaw weapon, unlike the sword and foil. So hits do not only have to be made with the point. As with floret, all sorts of conventions on the right of attack also apply to sabers. The valid target for saber is everything above the belt. The legs are less important with this traditionally cavalry weapon. That said, saber parties are the shortest and most intensive parties of all weapons. Fending off is more difficult than with the stabbing weapons and that makes distance and footwork extra important. Thus, the entire length of the 14-meter long carpet is used with a saber.

All classes are started with a warm-up. Then we start to work with technique of fencing. We conclude the lessons with a number of challenging parties.

The program for the 7 to 12 year olds is aimed at stimulating general sporting aspects, developing the coordination and the technique of fencing. We use the so-called Brassard system. A maximum of 16 students can train in this group. After about one year, children can participate in youth-tournaments.

For the 11 to 15 year olds, the emphasis is on competitive fencing, technology and tactics. For both groups, pleasure in sport comes first.

Participation in competitions is not mandatory.

During each training we start with a joint warm-up. Here attention is paid to strength & condition training, training of reaction time and footwork. Then you can practice with each other and the maître gives individual lesson instructions. At the end of the lesson there is the possibility of free fencing.

Participation in competitions is without obligation. 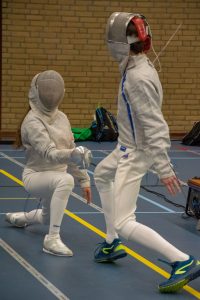 What gear do you need?

You will bring your own training shorts (long), T-shirt and sports shoes. The right shoes are important. Please do not use thick, wide shoes and most of all without air cushions in the soles. A shoe with a plain sole will give more grip during fencing. Shoes with light colored soles are the best. In case the sole is black please make sure they do not leave black stripes or marks on the floor when used.

During the introduction lessons the usage of the club fencing material is free.

Check for the possitiblity of renting gear under Membership

Wheelchair fencing is suitable for all people who cannot exercise while walking. The fencing sport is about hitting your opponent without being hit yourself. This is also the starting point for wheelchair fencing. Technology, tactics and speed are very important. It is a challenge! 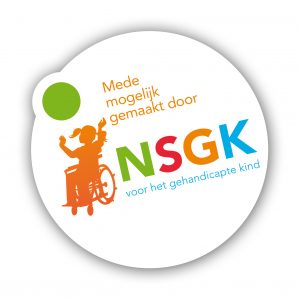 Wheelchair fencing at Schermvereniging En Garde is made possible in part by donors and volunteers from the Dutch Foundation for the Handicapped Child (NSGK).

Is wheelchair fencing something for you? 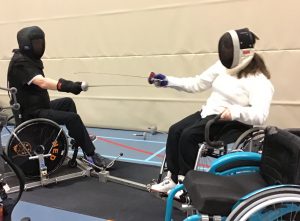 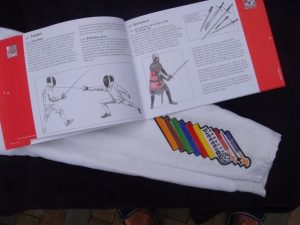 The Brassard system is a method used to provide structure in the training of the novice fencer.
You learn a piece of theory and practice each time and then jointly take an exam at your fencing instructor. The goal is that you are ready for the real tournaments. For example, to participate in the Youth point tournaments (JPT) and other national competitions.

The Brassard system is under development at the Royal Dutch fencing federation (KNAS). It exists every time out of a coloured booklet with theory, an associated Brassard (logo for your outfit) and a certificate. A detailed explanation can be found at the KNAS. Fencing club En Garde uses the Brassard system in the training of its youth members. There are 3 books published so far: yellow, red and blue. For this you can take the exam at your own Brassards maître in spring and autumn (see calendar for dates). For the higher (green and beyond) Brassards comes a central examination, expected to be on the day of a JPT.

What are the costs?

The cost for the Brassard system are: €12.50 per Brassard (including book, diploma and ironing logo). You start with the first Brassard theory booklet (yellow) and a sleeve logo. This allows you to achieve the maximum 5 different Brassards (colored bar). Of course you also get, after successfully passing the exam, the corresponding diploma.

If you have any questions you can contact the maîtres or the Zet aub javascript aan bij de browser.